The Crucial Service Part That Shouldn’t Be Ignored

So, What Is A Crankshaft Pulley

The auxiliary system of an engine isn’t one that at first glance seems complicated or important. It’s a few wheels with a belt after all. However, while it may be simple in appearance, this system is responsible for letting multiple components in the engine talk to one another; from crankshaft to camshaft, water pump to alternator, several key components from the top to the bottom of the engine rely on this key moving component to stay in sync with one another – making the Crankshaft Pulley arguably one of the most important parts of a vehicle engine.

The crankshaft pulley is responsible for two very simple, yet very important, tasks :

> Controlling the timing between the crankshaft and other components of the engine. Without this crucial link, pistons could not be brought into line with camshafts, cam followers and valves and the engine picks itself apart

> Absorbing vibration that comes from the Crankshaft. Without the damping rubber layer contained within a TVD, vibration would be passed through to the rest of the engine causing constant premature wear and eventually engine failure

Ok, It’s An Important Part. But Why Should It Be Replaced ?

Replacing a crankshaft pulley ahead of it’s eventual failure can not only help your vehicle run more efficiently, it can also save you an incredible amount of money on repairs. When a crankshaft pulley fails (or the timing belt due to a badly maintained crankshaft pulley), the timing of the engine is completely thrown off. Even a rotation or movement of a few millimetres can start to cause problems in a system so precise.

In a best case scenario, you would be looking at a bill to realign the timing of your engine by a mechanical expert to bring all components back into harmony.

In a worst case scenario, however, you are looking at the replacement of costly engine components with an extra labour bill for a complete tear down of the engine. Should you be looking at the absolute worst case, your engine could become completely written off as, thanks to companies such as Ivor Searle, purchasing and installing a quality reconditioned engine can be much cheaper than repairing a critically damaged one. 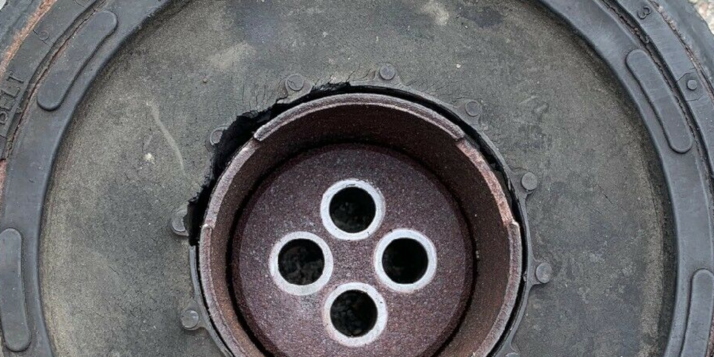 “Example of rubber / core separation on an original part”

Those Scenarios Don’t Sound Great. When Should This Be Replaced ?

Whenever there are issues within a vehicles engine, there are very clear signs even to someone who knows nothing about cars. Crankshaft Pulleys are no exception to this rule and when they’re very unhappy they will tell you.

Symptoms such as a loss or change in vehicle performance, knocking or more vibration than normal from the engine bay and even metallic tapping as engine parts slip out of sync are all very clear while the engine is idling or under load during use. At this stage, you are looking at a crankshaft pulley that is getting ready to fail, and should be inspected at the nearest chance by a mechanical professional.

It is worth noting though that, due to it’s incredibly important role in the engine, a Crankshaft Pulley should never get to the state of excessive wear or total failure; as long as you keep on top of your service history and your inspecting garage knows their way around a good annual service.

“The issue here is that a crankshaft pulley cannot simply be inspected from one side as most might think, it physically needs to be removed from the engine so that both sides can be examined for wear and damage. Without this crucial check, issues with the part can go unseen and will lead to your vehicle breaking down.” 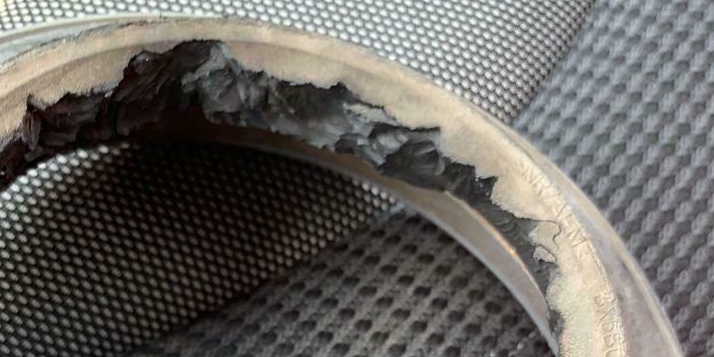 “Result of original part not being inspected / badly maintained”

It is also very important to note that the stretch bolts / screws, if a crankshaft pulley is assembled to the engine with stretch bolts, will also need replacing at the time of service inspection or total part replacement. Stretch bolts, by their very name, are “stretchy” and expand and contract under the enormous pressure of a working engine somewhat like the motion of a spring. The combination of this unique nature and having been manufactured from high tensile steel means that they are able to vastly outperform standard mechanical bolts which simply could not cope under the strain.

It is due to their nature, however, that stretch bolts must be replaced. As they expand and contract, exactly as they are meant to, they can become warped or misshapen and applying these bolts back onto an engine can lead to premature wear to the crankshaft pulley or even bolt shearing. Another contributing factor to fixing failure is that they are applied to a very high, very precise torque to yield and this in itself, while not affecting the first fitting, will also cause issues. With reuse of these bolts, they can become loose over time and will eventually shear under load.

Why Do These Parts Wear & Fail ?

In the best case scenario, a bolt warping under the stress of the engine will start to cause progressively louder noise as time goes by and the fault is left to worsen. At this point you are looking at minimal damage to the rest of the engine, and likely there will be no further issue if worn parts are replaced immediately.

However other failures, while not only very costly, can be fatal to the engine and several key components therein. A TVD (Torsional Vibration Damper) has a rubber layer which prevents the full vibrational stress of the crankshaft being passed to the rest of the engine. This rubber layer degrades over time and can even split the TVD into two independent pieces. This separation means that the timing of the engine is left completely out of sync and, in extreme cases, can cause damage to pistons or camshafts and even the cylinder head itself. With these engine components affected, you could be looking at complete engine failure. 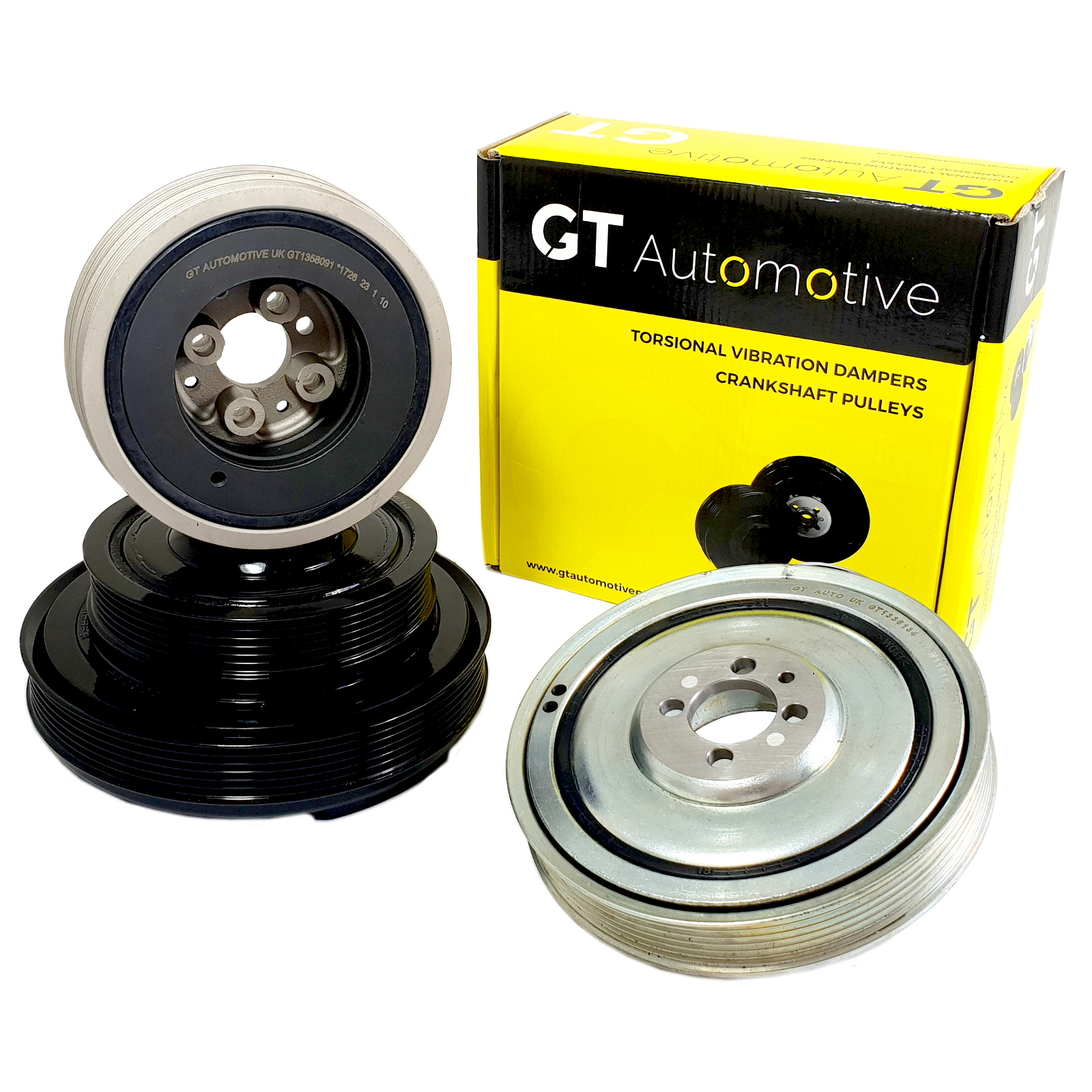 GT Automotive, since 2009, have been involved in many aspects of automotive components which include both OE and Aftermarket parts and services. We pride ourselves on our OE pedigree and, with 4 decades of combined staff experience, we believe that our level of OE quality touches every single one of our product ranges. If we don’t believe it meets fundamental OE standards, we don’t sell it. It’s that simple!

We are able to guarantee this level of quality across our entire range of Crankshaft Pulleys as we only have one manufacturing facility, we don’t cut corners or use multiple sources to serve the aftermarket. If we don’t have it, we’ll happily wait 6 months for production because we know that our manufacturing plant can provide a level of quality, performance and service that we are both familiar with and very proud of.

In fact, we are so confident with our parts that we offer a no quibble, manufacturer warranty across the range for 12 months or 12,000 miles. We don’t need a gimmicky 5 year warranty; our products do not require it and our customers just don’t need it. In our experience, if a crankshaft pulley from our range fails, it is almost always due to fitting issues and will result in a premature failure within the first 12 months of fitting. The warranty is purely there for piece of mind, and knowing that the part comes with a team of after-sales experts on your side should we ever be needed.

Some Of Our Popular Applications, In Brief

Available DIRECT and from all good independent distributors and stockists within our key partnership network : 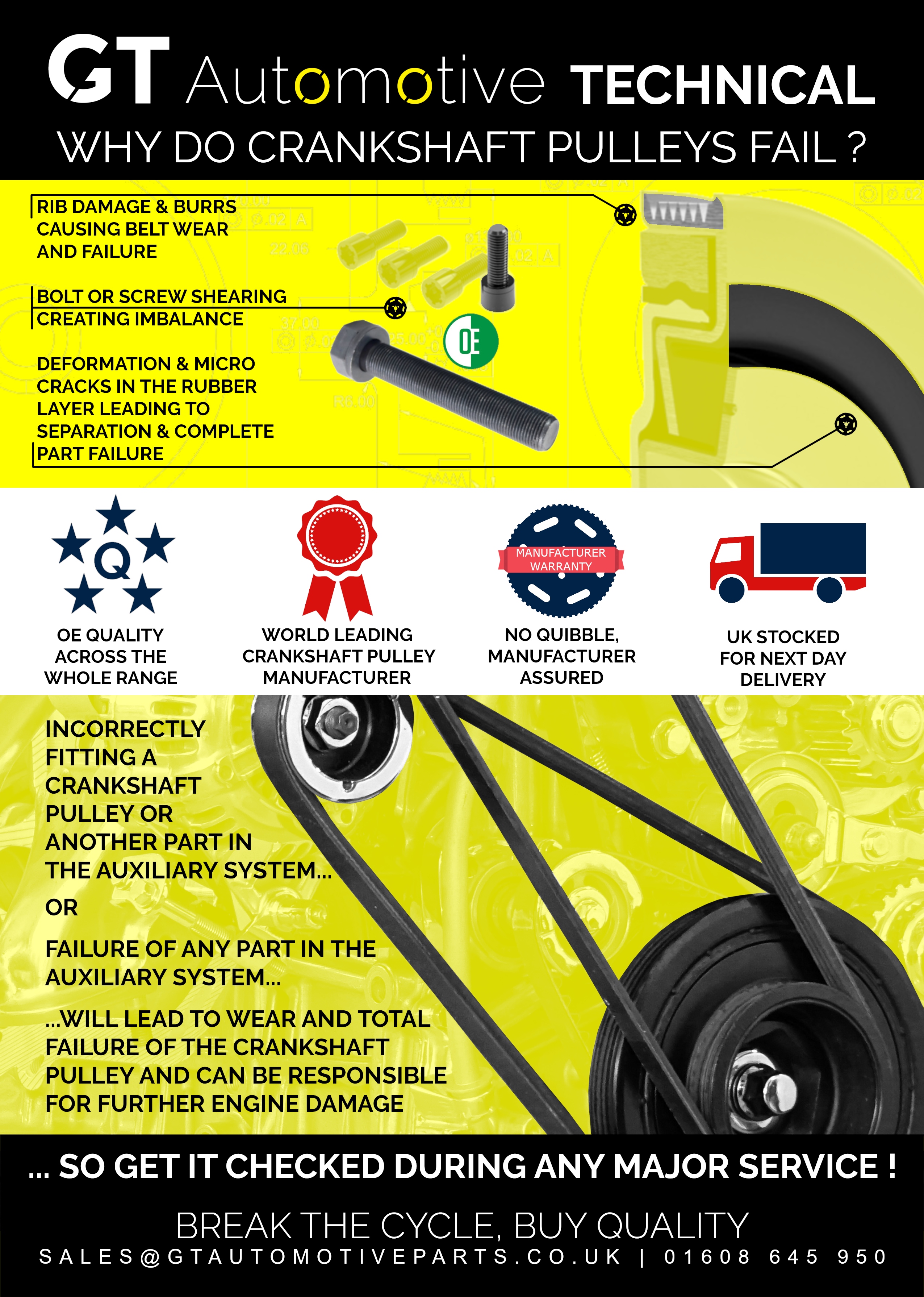